Exactly one year ago was the worst day of my life.

After vomiting for nearly two weeks a CT scan showed Bram had a brain tumour, causing life threatening hydrocephalus. Bram was still lying in the CT scanner when a radiographer told me this. Shock, pain, fear were my initial reactions. But within seconds my brain went into overdrive. The radiographer invited me into his room to explain. But I could not do this alone. I had to tell Laura. Laura was waiting in Bram’s hospital room. While I made the two minute walk back to Laura I took a few deep breaths. How do you tell this???

The staff in East Surrey Hospital were fantastic. They comforted us as much as they could, sat down with us to explain the initial way forward and organised an ambulance for us to transfer Bram to St. George Hospital in London. They gave Bram his first dose of steroids, to relieve a bit of pressure in his head.

After arrival in St George’s we met a neurosurgeon who explained to us what exactly they had seen on the CT scan. The plan of action would be to insert a VP shunt (drain) and resect the tumour in the next couple of days. He also told us some brain tumours are curable, some are not and that we only would find out after the tumour is removed and tested in the lab.

After arrival on the ward we went to bed. Due to the exceptional circumstances we were both allowed to stay, and sleep with Bram in his room. That has been the last night Bram, Laura and myself slept together in one room. When we woke up it was the 15th of March……Bram’s 1st birthday. We were far from home, in a hospital, no spare clothes with us, no presents. The staff had made some birthday posters for Bram. I had to go to the hospital shop to buy Bram a birthday present. Not sure yet about his survival chances I wondered if this would be the last present I would buy him.

The medical team reviewed Bram and advised us that he would have to be transferred to King’s College Hospital. So we went with an ambulance again. Blue lights and sirens on. How many kids have done that on their birthday? That evening Bram underwent his first surgical procedure (15 so far), and a pressure relieving VP shunt was inserted in his head. This went well and Bram felt a lot better in the days after.

A few days later came the big day. Brain surgery to remove the tumour. We knew there were great risks attached to this. A small baby brain with a big tumour is difficult to perform surgery on. We hoped for the best, but were prepared for the worst. We said goodbye to Bram in the morning. Laura just outside theatre as she was too distraught, and I inside theatre where I held his hand and gave him a final kiss before he fell asleep. And than the wait started……

We were informed beforehand that there was no set time for these kinds of surgery. The surgeon would take as much time as he would need to remove as much tumour as possible. This would be followed up by a MRI scan to see if everything was removed before we would see Bram again. Bram was put to sleep at 08:45 in the morning. How to spend our day? We gathered our belongings and decided to go for a fried breakfast. We followed this up by a couple of hours sleep in the Ronald McDonald House where we were staying (and would eventually stay for 105 nights). We than went for a walk and had a coffee and bought some supplies at Sainsbury’s. Eventually we settled down on the couch in the Ronald McDonald House. We watched some TV, but more and more started to stare at our phone. This wait was horrible. By now it was 2000. Eleven hours had passed and still no news. On TV we watched a British cooking contest. Amazingly one of the contestants was called….Bram. And it did not look good for him at the beginning. He was the lowest ranked contestant and was the favourite to leave the show that day. But Bram impressed and survived the show. Was this a sign?

We could not wait any longer and decided to walk back to hospital and have a change of scenery. Before the end of the street, at 2115 we received the call. Bram was back from surgery, and on intensive care. We were asked to come to the parental room to meet with the neurosurgeon. Relieved that the wait was over, we were still scared….. Why did the neurosurgeon meet us? It turned out that he wanted to tell us himself that all had gone well and that the whole tumour was successfully removed. Minutes later we finally saw Bram again. Hooked up to a ventilator, and lots of medication. Big bandage on his head. An incredible sight. Bram was awake and moving all limbs and definitely reacted to our voices. What felt as the longest day ever was finally over.

A quick recovery from here and take him home in a few days. That was the plan…..but Bram does not adhere to plans as we would find out……

About a week after Bram’s tumour had been removed we got the results. And they were not good. Bram’s tumour was cancerous, called an Anaplastic Ependymoma. And surgery alone would not be enough to survive. He would need chemotherapy or preferably radiation.

To keep a long story short. Bram’s recovery was an absolute nightmare. He spend about 60 nights on intensive care, 15 rounds of surgery, problems with breathing, problems with his VP shunt, serious infections with MRSA, CRE, and CSF(brain fluid). He was severely breath holding at times if he would get upset, so much he would pass out and in one case even needed chest compressions. He underwent six weeks of chemotherapy, but the tumour regrew. More surgery to remove it. This time in about 5 hours. This got followed up by 30 round of radiation. Six weeks, Monday to Friday with a daily general anaesthetic.

And than came the 21st of October. Bram got discharged from hospital after 225 night and returned home with us. He has had two clean scans since and is making progress. He still has many health issues. He is unable to sit unaided, can’t stand or walk. He is unable to swallow, get fed with a tube in his stomach. He breathes though a tracheostomy, can’t make any noise. His eyes are squinted.

BUT he is still with us, he is improving every day. He has shown us that he is a very determined little boy. He is a supreme fighter and does not give up. He is remarkable in what he has achieved. We nearly lost him on a few occasions. He had to endure a lot. But he is still this happy boy with this infectious smile. He hardly ever cries, but laughs a lot. He is a smiling assassin. He will beat his cancer while smiling.

The last year has been extremely tough. Bram’s illness and all the stress were tough to handle. But we did. We kept it together. We have been with Bram on every step of his journey while not forgetting about Max. It is incredible how much a person can endure and how strong one can be.

Although tough the last year has given me a lot of positive things as well. so many positive moment I will never forget and which over time will outshine the horrible moments. My marriage with Laura is even stronger. We have dealt with this together. I can say that I am a better husband, a better father for Max and Bram and hopefully a better person as well.

I am very proud of Bram. He is such a courageous boy. So determined to overcome this all. He has shown us all that life is worth fighting for. To never give up. To stay positive and to always smile. Nothing is impossible for him.

Today was about remembering the last year. Tomorrow is one to celebrate. Bram turns 2 and we will finally have a birthday celebration for him. 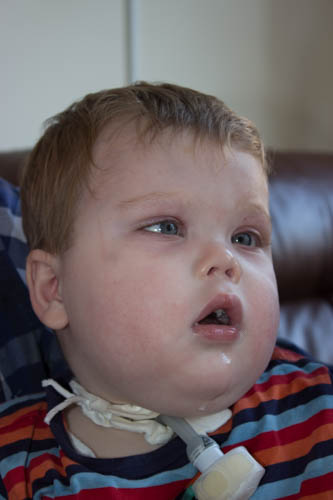