Another roller coaster of a week. On Monday Bram had a final CT scan of his head to check if his brain fluids had returned to normal. They had, but the scan also showed that the cyst in his head was growing quickly. It now measured 4 by 5 cm. This growth needed intervention. After a day of discussion among the neuro team it was decided to drain the cyst, and insert a little reservoir in Bram’s head. This so the cyst can be drained again in the future were it to fill up again. So on Wednesday Bram had his 10th! round of surgery. This went successful and we met up with Bram again a couple of hours later on Intensive Care. As a precaution Bram was kept on the ventilator, so this could be taken off him the next morning in a nice and controlled fashion. But Bram is boss, so he decided to move his head so violently that the ventilator came out. My boy is determined to get his way! He was not having any problems with his breathing and he was kept off the ventilator.

On Friday the unthinkable finally happened. After 104 nights he got discharged from King’s College Hospital, and transferred by ambulance to Great Ormond Street Hospital. With the amount of problems Bram has had so far we have often wondered if we would ever leave. Laura and I would like to thank all the staff involved in Bram’s care at King’s for their fantastic work. Their care for Bram and us has been amazing. They laughed and cried with us, gave us hugs. We will miss you!

That same afternoon we met up with Bram’s oncology team. They gave us a rundown on what to expect during chemotherapy. His total treatment will last 379 days, and he will receive chemo every 14 days. They explained us why to use chemo (to try save his life), all the possible side effects (hair loss, sore mouth, pins and needles in limbs, vomiting, constipation, reduced kidney function, reduced fertility, potential hearing problems etc…) and how they would manage all of this. It is very clear that we are still working to cure Bram, but also that success is far from guaranteed. We finished our chat by giving our written consent to start chemotherapy for Bram.

Bram has a private room in hospital, where either Laura or myself can stay with him at night. We will be there for him, day and night to support and comfort him during this journey. But finally Bram is stable enough that one of us can be at home as well. Max misses us enormously and is as much as a victim as Bram is. We are pleased we can spend more time with him as well now.

On Saturday Bram had his final checks done and that afternoon started his chemotherapy treatment. His first dose was a small syringe with a drug called vincristine and a drip bag with a drug called car operation. This was administered in about one hour. Also he was given lots of other drugs to counter the side effects. We are pleased to say that so far his side effects are minor. Just a little bit of vomiting. But Bram is very settled for the moment.

On Sunday we cleared out are room we occupied at the Ronald McDonald House Camberwell. This charity house provided us 105 nights of accommodation, only minutes away from King’s College Hospital. This has been our home for the last couple of months. Hotel style bedroom combined with communal kitchens/laundry/living rooms/garden. All provided free of charge to families with very sick kids. The staff and other families were amazing. Being able to have a chat after a long tough day in hospital when everything seems going wrong, or share good news was enormously helpful. I can’t even imagine how hard our life would have been without this place. Thank you!

Bram is now recognition from his chemo dose, and is getting to know all the medical teams here in Great Ormond Street Hospital. They will continue to get Bram as healthy and mobile as possible. We hope Bram’s health stabilises a bit now, no more surprises. It will take weeks before we know if chemo is working at all. But finally we can say Bram’s cancer is being treated. 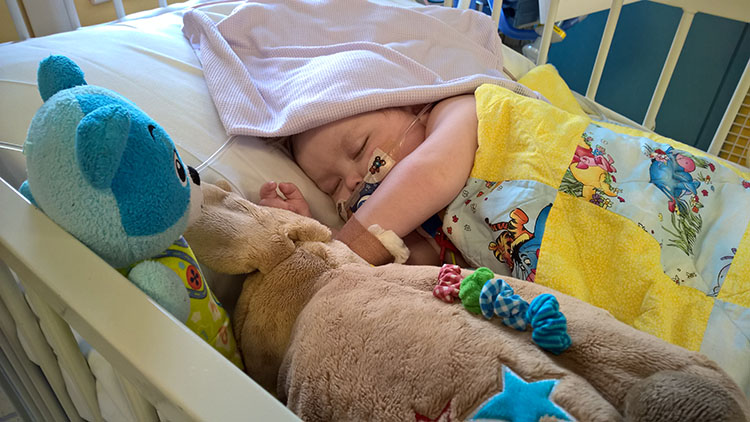